The journalism world today is mourning the passing of an outstanding colleague, Tim Russert of NBC News. Russert, 58, was the managing editor of their Washington DC Bureau and was best known as the tenacious, tough-but-fair host of NBC's Sunday morning political talk program "Meet the Press." Remarkably, NBC Nightly News last evening was devoted entirely to remembering this smart and decent man. Russert was up-front (but never in anyone's face) about being a practicing cradle Catholic of working-class Irish roots. It was good to see how his co-workers knew this about him and appreciated how it informed his journalism: with high integrity, a passion for the truth and a commitment to hold those in power accountable -- exactly what journalism should be doing in a democracy. They acknowledged his love for his family and faith, and thought it somehow fitting that he had just returned from a trip with his wife and son to Italy where he had the privilege of meeting Pope Benedict.


There is a great deal of talk in newsrooms about the need for 'diversity' but the discussion is nearly always in terms of gender and racial diversity, rarely in terms of religious representation. It is journalism's big blind spot. The news business needs more people like Russert to hold journalism itself to a high standard of decency and act as its conscience.
Posted by johnny dangerous at 8:20 AM No comments:

Anyone notice that the "10 Rules for Thrillers" could be applied to the Gospel of Mark?
Posted by johnny dangerous at 8:54 AM No comments: 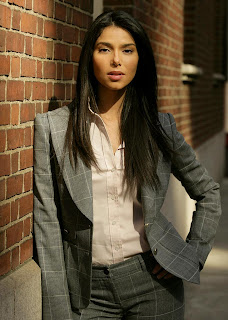 Screenwriter and Edgar-Award-winning novelist Brian Garfield is credited with composing the "10 Rules for Thrillers" that launched John Grisham's career among others. So it's gotta work for me, too, right? I've been sorting through the characters and plotlines for "Venom," the story that follows "Bleeder," with these 'rules' in mind.

1. Start with action, explain it later. Start with trouble, conflict, confrontation, fear, violence. Save the backstory for sprinkled bits later. If the editor doesn't turn the page, no one will. So my story begins with a drug raid that nearly goes bad for my protagonist, Selena (Rosalyn Sanchez, pictured here, could work as my ex-DEA agent). The idea is to get the show on the road and put some of the major players on stage right away.
2. Make it tough for the protagonist. Provide a worthy adversary and difficult complications. Opposing forces must be stacked against the protagonist. So Selena is partnered with men who disrespect her within a Latin community that distrusts her and she carries emotional baggage that nearly disables her. Oh, she's got family problems, too. And the killer is very, very dangerous.
3. Plant it early, pay it off later. The solution must be based on a conflict that is established early in the story. There can't be sudden revelations or new characters at the end, and no cavalry to the rescue. Surprises are necessary but they must seem inevitable, based on what came much earlier. This is what makes those first 30-50 pages so awfully important. I passed page 30 yesterday and I think I've set up my major throughlines. Aristotle said "write with the end in view," and so by having something to write toward, I'm better able to set up the eventual pay-offs.
4. Give the protagonist the initiative. Good writing depends on conflict - interior (alcohol problem, family troubles, a phobia, temperment issues) and exterior (a dangerous enemy, an untrustworthy ally, nature). The good suspense story depends on a protagonist who takes the initiative to achieve a goal against daunting odds rather than just letting things happen to him/her. While Selena is reluctant to get 'back in the game' after a time away in a deliberate attempt to distance herself from her troubled past, she must. That's the next point:
5. Give the protagonist a personal stake in the outcome. The more personal the protagonist's involvement is in the story's central conflict, the better. And the stakes must be high: if the protagonist fails, it will cost her awfully. Her own life or those of loved ones should be in danger - and in my story, they are. In the emotional layering of the story, Selena must also come to terms with her Latina identity, resolve the anger over her brother's death that pushed her into law enforcement in the first place, and atone for the terrible guilt she feels over wounding a little girl in a botched raid that ended her career.
6. Give the protagonist a time limit, and then shorten it. If you can have a ticking bomb, that helps. The 'ticking bomb' in my story is the killer, who is killing according to a schedule that Selena only figures out late and then has it slightly wrong - the last murder is set to happen a bit sooner than she thinks to someone she cares about. And when she figures this out, she is alone and in the greatest jeopardy yet.
7. Choose your character according to your capacities, and hers. If you're writing a police procedural you'd better know about police procedure - enough to make it credible and to stand up to the criticism of real cops. Having watched a lot of TV won't do; real research is required. This is why many successful suspense stories feature an innocent bystander who is caught up in circumstances and is moved to deal with a dangerous opponent. The protagonist's ordinary-ness makes the confrontation all the more scary. This was how my first book "Bleeder" was built. It was tricky, because the protagonist, Reed, needed to be clever enough to figure things out apart from police assistance and succeed against a determined enemy. But Selena has Academy training and DEA experience, so I've had to do a good deal of library work and interviewing to make her real. Her background enables her to work independently, manage an investigation and handle a gun. I probably need to get myself to a firing range and feel the kick of her Sig Sauer in my own hand.
8. Know the destination before setting out. The ending must satisfy and fulfill all the promises set up by the early stages. The worst thing is to have an ending that disappoints or is anti-climactic or feels contrived. An unsolvable problem cannot be solved by some dramatic 'deus ex mchina' rescue. The genre demands a conclusive, decisive ending, not some ambiguous dribbling off. If it starts with a bang (and it must) it should end with a bigger one set up by the first one.
9. Don't get fancy. By this, I mean that a writer - a beginning one in particular - should obey the rules and expectations of the genre. Some unique angle can be exploited, but readers come to such books with a certain anticipation of pleasure - and you must deliver it.
10. Don't write anything you wouldn't want to read. This may sound silly, but some beginning writers try to spot trends and then write toward it. "Oh, westerns are big now - I'll try one." No, don't do it unless you like Louis L'Amour stories. It's always a good sign if you tell yourself that you'd gladly buy your own book. Then your heart is in it.
Posted by johnny dangerous at 9:19 AM No comments:

Having mentioned The Inklings in an earlier post, and bypassing the prolific and incisive GK Chesterton for the moment, I offer here a brief listing of contemporary writers whose Christian sensibilities are embedded in their work, and who exemplify literary excellence. In any discussion of what "Christian fiction" is about - and it is an elusive term - these are writers to consider (and I present them in no particular order).

Frederick Buechner (BEEK-ner) is a Presbyterian pastor whose lyrical work brings one to tears and laughter by turn. "Godric" and "Brendan" are historical novels I admire partly because of their ambivalent (and very earthy) treatment of saints, besides the gorgeous prose. His heartbreaking memoirs are even better (especially when he chronicles the struggles of his anorexic daughter). His books built around alphabetical lists of Biblical characters and religious cliches are hilarious and moving at the same time, and serve to make the faith strikingly relevant, especially for cultured unbelievers. He himself hovers at the edge of doubt continually.

Kathleen Norris is a writer like Buechner, a Methodist whose strongest work is in memoir. "Dakota: A Spiritual Geography" is a beautiful work, and her account of coming to genuine faith in "Cloister Walk" is memorable. "Amazing Grace" is similar to Buechner's alphabet books, whereby she takes common religious terms and expounds upon them in a way that makes them new. Her work consistently ends up on the NY Times Bestseller List.

Susan Howatch's Church of England series is exquisite in its stylish exploration of our deepest motives, following a set of smart characters from the 1930s through the end of the 20th Century. Howatch cut her teeth on vast family sagas with a gothic edge. Her latest series, set in the present around the Healing Centre of St Benet's in London, is a gripping and layered portrayal of deeply flawed yet empathetic people groping through the fog of sex-and-power secularism toward genuine meaning in life. It's not everyone who can portray a male prostitute protagonist with such force and psychological insight.

Michael O'Brian's apocalyptic novel "Father Elijah" is part of a brilliant series that is theologically astute and beautifully written. Don't let the 'apocalyptic' part throw you; this is no cheesy "Left Behind" melodrama. O'Brian also paints and does jewelry work, and this artistry shows in the well-wrought prose.

Well, that'll do for now. I must admit that when I read people like this I throw up my hands in despair and say, "I could never write like this - why bother?" But I am encouraged at the same time, to know that there are men and women of faith who bring their worldview to bear on their art, making it both true and beautiful.
Posted by johnny dangerous at 9:18 AM No comments: