The Reindeer on State Street 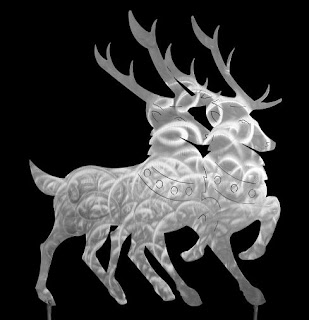 'Twas the night before Christmas and all through The Loop
the reindeer were shopping for Santa's new suit.
A last-minute short in a Lionel train
had burned the elf's coat - turned it black in the flame.
So now they were desperate and dashed all around
in hopes that a fitting replacement be found.
On Dancer! On Dasher! On Prancer and Vixen!
On Comet and Cupid! On Donder and Blitzen!
They split up on State Street where some went to Field's
and others to Nordstrom's for late season deals.
Alas! All the storefronts were locked for the night.
The windows were dark. Not a tailor in sight.
It wasn't until on the Miracle Mile
that a man with a bottle, a beard, and a smile
saw them shiver. He offered his coat and he said,
"It's from the Good Will. You don't mind that it's red?"
Elated, the reindeer said, "Thanks! You have saved
us!" And they flew away while the man waved
"Bye!" Not til later did they understand
the reason for seeing the hole in his hand.

(c) John J. Desjarlais. This poem previously appeared in The Rockford Review.
Posted by johnny dangerous at 4:38 PM No comments: