DeKALB Kishwaukee College's own John Desjarlais will release the second book in his mystery series Friday.

Desjarlais, professor of English and Journalism at Kishwaukee College, studied at the University of Wisconsin-Madison, Columbia University and Illinois State University, worked at Wisconsin Public Radio and wrote three books before his upcoming release, Viper. Desjarlais said that the act of writing is itself a constant source of inspiration.

"Inspiration comes when the pen moves across the page or the fingers begin to type," Desjarlais said. "It is in the act of writing that ideas come."

Viper is the sequel to 2009's Bleeder and follows protagonist Selena De La Cruz as she struggles to find out why her name is in her church's Book of the Deceased. Viper, like Bleeder, combines elements of mystery novels with religion and mysticism. Aztec myths, Mexican Catholicism and bi-cultural identities are themes of the novel, Desjarlais said

"First, they are indeed classic mystery novels in the sense that they are driven by a crime requiring a sleuth to solve the puzzle rationally, with clues planted for readers to follow and a surprising solution at the end," Desjarlais said. "The crimes involved in both books determined their spiritual flavoring."

Desjarlais said he takes extra care to make sure the portrayal of religious beliefs and practices is accurate. Anything else, he said, is a form of disrespect to readers.

Readers can look forward to a third book in the series, which is currently in the works. Characters from the first two novels will be brought back for a new story dealing with life insurance fraud.

Readers can see book summaries and reviews at Desjarlais' web site, www.johndesjarlais.com. Titles are on sale at Amazon.com.
Posted by johnny dangerous at 8:29 AM No comments: 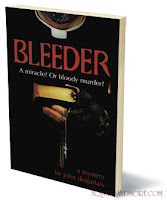 Finally, I get to review a book in my favorite genre: cozy mystery! John Desjarlais masters it well in Bleeder. Reed Stubblefield is a professor on sabbatical. While often used to finish research or publish books, a sabbatical is truly meant to be a time of learning, development, self-improvement. Reed endures life "lessons" that he didn't anticipate in this quiet rural town.

Written for adults, older teens will also appreciate the rich context within which Desjarlais situates his mystery as well as his multi-faceted characters. The protagonist, a religious skeptic, ends up knee-deep in a possible miracle - or is it a hoax? Criticism and misunderstanding of Catholicism are treated realistically and given intellectual critique. In contrast to authors like Regina Doman who integrate classic literature with a poetic effect, Bleeder is equally intellectual but for the philosopher rather than the poet. However, rather than a heady treatment, we are entertained with a continuous theme tying Aquinas to Aristotle in the self-talk and dialogue of characters. This gives it practical application to every day life (great for school assignment). A standard ethical process for decision making is provided that leads to the truth.

Each character in the story is dubious, and the reader sees how easy it is to appear to be a "good" person when not. Some are misguided religious fanatics who perpetuate their own beliefs from within a church community, showing how easily one can think they are following a path of Truth while actually straying into twisted religion. For others, their desire to see a good outcome may lead them to force results regardless of the means taken, forgetting to leave all up to God's will. The outer community also has its struggle with outsiders (immigrants) changing its culture, and the common fears and prejudices that accompany such changes.

At the same time, however, our protagonist is wrestling with serious matters straight out of modern living. Whether it be dealing with the death of his wife, being a victim himself of assault and injury, depression, medical insurance debacles, loss of employment, or relationships with family and love interests, Reed Stubblefield contends with it all. As salt is rubbed in his wounds, he doesn't falter but instead perseveres. An unseeming hero, yet a hero he is when it comes to conquering life's challenges. The author's treatment of loyalty, chaste dating, and self discipline is done in a manner that is very realistic, not idealist, and yet Reed makes the right choices each time.

If I were teaching junior/senior year secondary school (college prep) or lower level college ethics, philosophy or literature, I'd assign this book. What a great way for older teens and young adults to test their own ideas of how to live out Aquinas or Aristotelian ethics. Yet it also provides meaningful conversation for book clubs too. The author smoothly takes his reader into small-town life leaving much to be discussed about the foundations of ignorance and prejudice, true loyalty vs. self-protection.

Of course, putting aside its deeper meanings, as a fast-paced mystery it equally serves the purpose of pure enjoyment for any crowd too!

Just like what we watch on TV or movies, and who we hang out with, books also influence our values and attitudes. Our perspective on life is continually altered from what we read and, through that, so are our choices and behaviours. We are never too old to need a good story where realistic characters struggle with life's challenges and temptations, but end up having the self-discipline to make the right choices. Bleeder is such a story and highly recommended! See our criteria review against character education guidelines at http://www.litland.com/

Read more: http://www.seattlepi.com/lifestyle/blogcritics/article/Book-Review-Bleeder-A-Mystery-by-John-Desjarlais-1422442.php#ixzz1PLw32bdN
Posted by johnny dangerous at 7:10 AM No comments: 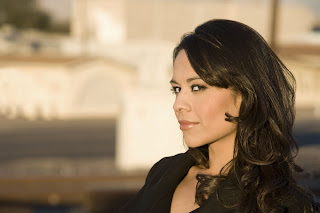 I am such a sucker for a strong (if sometimes flawed) female protagonist -- and VIPER delivers.

Selena de la Cruz (pictured here) is strong because she's vulnerable, both contemporary and traditional at the same time, which makes for an uneasy road. A former cop now working as an insurance agent, she's brought back into the world of drug smugglers and homicide when her name turns up in the Book of the Dead. She's still alive, but the people whose names precede her are being violently murdered. Suddenly a marked woman, Selena must face an old nemesis -- El Serpiente -- while solving a series of murders that may or may not be part of a plan of divine retribution, and may or may not be a prelude to her own demise.


Exciting stuff, this. The mystery hits several themes -- faith vs unbelief, insider status vs outsider exclusion (and how those edges cut both ways), justice vs retribution. I especially appreciated Selena's struggle to be an assertive, intelligent female in a culture that has traditionally valued a certain home-and-hearth-based passivity even as it produces strong women who buck that trend.

But this book isn't just smart; it's also fast and edgy and laced with murderous tension. Read VIPER, and then do like I'm doing and go get BLEEDER, the first mystery novel by Desjarlais. Or better yet, do it the other way around. But don't miss these books. 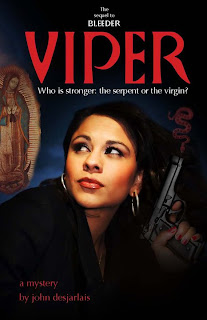 VIPER is now available for pre-order at Amazon.con or Sophia Institute Press:

Selena De La Cruz has a problem.
Just before All Souls' Day someone entered the names of nine parishioners in her church's Book of the Dead, seeking prayers for their souls.
The problem?
All nine are still alive. Until they start getting murdered . . . one by one . . . in the precise order their names were entered in the Book of the Dead . . . and always right after a local visionary sees a mysterious woman known as The Blue Lady.
Is she the Virgin Mary warning the next victim? Lady Death, the Aztec goddess, come to claim another soul? Or someone less mystical, but deadly nonetheless?
Selena doesn't know but had better find out: only a few souls on that list have not yet been murdered, and the last name on it is . . . Selena De La Cruz.

Posted by johnny dangerous at 5:52 PM No comments: