http://chrisredddingauthor.blogspot.com/2010/02/authorsday-john-desjarlais.html is where I'm guest blogging this month on how BLEEDER began as an historical novel and became a contemporary mystery.
Posted by johnny dangerous at 4:41 PM No comments: 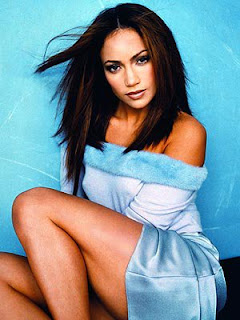 This is the funniest thing: I received a Facebook message this week from the REAL Selena De La Cruz, who introduced herself and asked some questions about my novel-in-progress, VIPER, a story that features "her" as the protagonist.

There is always the possibility that a character's name will turn out to match a real person's name, though it is always a coincidence. It is just a little startling to have a 'character' contact you. This 30-something married-woman-with-kids is a good sport about this, asking when the book will be out "so I can read about myself," and mentioning that she drives a sporty Mustang (the character Selena drives a vintage Dodge Charger). The photo she posts in her Facebook profile even matches, to some degree, the image I have of Selena - that's her photo here. Isn't this really J-Lo? Maybe she used a 'celebrity-look-alike' app in Facebook for this. Could be wrong.

She told me that most people spell her name wrong (she spells it Salina) but it's ok with her if I spell it Selena. I replied that the name is reminiscient of the pop singer Selena and related to the Greek goddess of the moon, Selene (the theme of the moon is important in VIPER).

Anyway, it's been fun to correspond with my 'character' this week and it's made the fictional Selena even more real to me.
Posted by johnny dangerous at 7:58 AM 1 comment:

I'll be speaking and signing copies of BLEEDER and RELICS at Borders of DeKalb, IL, on Saturday, February 13, 5-7 pm. Musicians, Valentine give-aways - c'mon by.
Posted by johnny dangerous at 1:44 PM No comments: