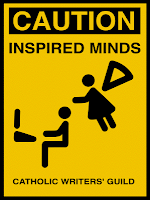 The conference will host publishers, editors and authors from all aspects of the Catholic writing world, including magazines, devotionals, novels and educational materials. The panel discussions, presentations and workshops will cover all aspects of writing, including generating query letters, crafting a good story, worldbuilding, marketing finished works and more.

In addition, editors from several Catholic publishers will be on hand to share their wisdom and hear authors propose their works. The Catholic Marketing Network's International Trade Show will serve as the exhibition floor for the convention, giving writers a chance to browse the booths, investigate other publishing companies, and meet with the published authors at book signings hosted by the Catholic Writers' Guild.

The CWG also has its own booth, where it will feature books by its members. Presenters for the conference include: author/Sophia Press submissionseditor Regina Doman (Angel in the Waters); Pauline Books and Media Editor Sister Maria Grace, CEO of Ignatius Press Mark Brumley (How Not to ShareYour Faith), Susan Brinkmann editor of Canticle Magazine, Lisa Wheeler, Executive Vice President of the Maximus Group (PR and marketing firm for The Passion of the Christ), author/Ascension Press publisher Matt Pinto (Do Adam and Eve Have Belly Buttons?), short story writer Arthur Powers and mystery author John Desjarlais (RELICS, BLEEDER).

"This is a fantastic opportunity for both writers and publishers to connect," said science fiction writer and Catholic Writer's Guild President Karina Fabian. "The CMN has been especially generous in offering to share its facilities and programs with us, which really enhances the quality of the conference for attendee and presenter."

Conference Coordinator and CWG Vice President Ann Lewis adds, "There will be a lot of good information, encouragement and learning opportunities for Catholic authors at our live conference. Our goal is to help good Catholic writers to get published. The world needs their words."

To register or for more information, go to http://www.catholicwritersconference.com/. Registration is $80 until June 1st, $99 until July 31st and $110 at the door.

(Well, as noted above, yours truly will attend to promote RELICS and BLEEDER and to guide seminars in fiction).
Posted by johnny dangerous at 11:44 AM