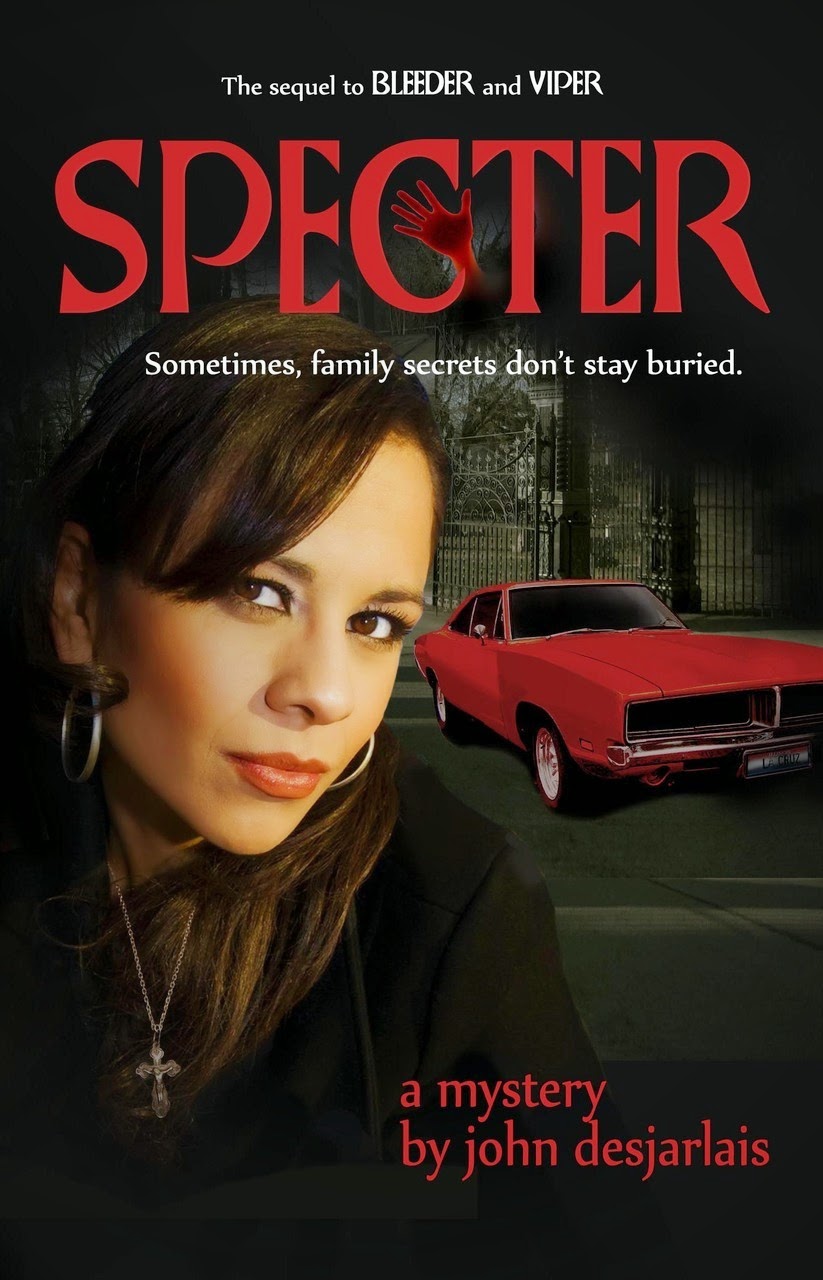 Now that SPECTER is out, some groups may want to gather to read/discuss it. So may I present:

SPECTER Discussion Guide
By John Desjarlais
SPECTER is the third novel in a contemporary mystery series. While it can be read as a stand-alone, an acquaintance with the earlier two entries can be useful. Story summaries for BLEEDER and VIPER appear below.
The questions can be used in a single meeting or, as in some college classes, in two weekly meetings – reading the first half of the book in Week 1 and the rest in Week 2.

Some notes for discussion facilitators:

This SPECTER summary may be useful in promoting your book club/discussion:
1993: the Cardinal of Guadalajara is gunned down at the international airport just before meeting the Papal Nuncio coming for a state visit.
2008: The Vatican re-opens the case, no longer convinced the Cardinal was accidentally caught in the crossfire of rival drug gangs.
Now: Former DEA Special Agent Selena De La Cruz is asked to join the investigation, since her Papá – a former Mexican oil company executive and diplomat – may have had a part in the murder, resulting in his own death. But what, exactly, was his part? With fiancé Reed Stubblefield, Selena digs up clues only to uncover a shocking family secret that threatens to destroy those she loves the most. And is she merely dreaming about Papá, or is he appearing to her from Beyond the Grave to deliver a warning?

DISCUSSION QUESTIONS
1. Reed Stubblefield and Selena De La Cruz first met in BLEEDER and became engaged in VIPER. How would you describe their relationship and individual personalities? What attracts them to each other – after all, Reed acknowledges that even apart from their Anglo/Latin difference they seem to be “incompatible. I’m North Side, you’re South Side.  I’m Cubs, you’re White Sox. I drive a Volvo, you drive a Charger.”

2. What seems to be troubling, or repelling, in their relationship?

3. What do we learn about the relationships within Selena’s family? How does Selena’s relationship with her deceased father and pious godmother complicate her life with Reed?

4. Why does Madrina believe Papá is appearing to them from Purgatory? What is your understanding of this belief? What do you make of Selena’s explanation of it on page 57-58? You can see the official Catholic teaching in the Catechism of the Catholic Church, paragraphs 1030, 1031, and 1032: http://www.vatican.va/archive/ccc_css/archive/catechism/p123a12.htm
There is a small ‘museum’ in Rome that displays items purportedly proving the existence of this intermediary state and the ‘ghostly’ appearances of suffering souls to the living: find it at http://www.traditioninaction.org/religious/e048-Museum_1.htm

5. “Ghosthunter” hobbyist Sean explains ‘ghosts’ from a Catholic perspective on page 125-126. How does his explanation compare to secular representations in popular TV shows? Why is it important for Sean to pray for spiritual protection before proceeding with his investigation?

6. Do Reed and Selena react to various revelations the way you think you would in a similar situation? Do you find their actions troubling? Are their actions consistent with their characters? How do they change through the course of the story? What events trigger such changes? What do you make of Selena’s somewhat flirty attraction to Von Bingen?

7. Is “The Beast” a prop or another male character?

8. What kinds of ‘secrets’ drive the story? What effects do secrets have on family life? How is forgiveness possible when family secrets have such profound, long-lasting effects?

9. What actors would you cast in the roles of the characters if the book were made into a motion picture?

10. The Vatican still regards the true case of the Cardinal’s assassination open. SPECTER proposes a resolution to the case. Do you find it plausible?

11. What did you think of the final confrontation? The ending? What does the Biblical quote in the “Epilogomenon” add to the resolution of the story?

12. Do the location and environment of the book color the telling of the story or are they merely a backdrop? What effects do the settings have on the central characters?

13. Characters change in a story, but do you, the reader, feel 'changed' in any way? Did the story expand your range of experience, challenge your assumptions or affirm your beliefs?

14. If you could ask the author a question, what would you ask? Have you read other books by the same author? If so, how does this book compare? (Consider inviting the author to ‘meet’ the group via Skype or a conference call – jjdesjarlais (at) johndesjarlais (dot) com).

15. If you gave the book a rating of one to five stars (five being high), what would you give it? What would you say in a one-or-two sentence review to explain your rating? Consider posting your ratings/reviews to amazon.com or goodreads.com

BLEEDER Summary:
When classics professor Reed Stubblefield is disabled in a school shooting, he retreats to a rural Illinois cabin to recover and to write a book on Aristotle in peace. Oddly, in the chill of early March, the campgrounds and motels of tiny River Falls are filled with the ill and infirm -- all seeking the healing touch of the town’s new parish priest, reputed to be a stigmatic. Skeptical about religion since his wife’s death from leukemia, Reed is nevertheless drawn into a friendship with the cleric, Rev. Ray Boudreau, an amiable Aquinas scholar with a fine library --  who collapses and bleeds to death on Good Friday in front of horrified parishioners. A miracle? Or bloody murder? Once Reed becomes the prime 'person of interest' in the mysterious death, he seeks the truth with the help of an attractive local reporter and Aristotle’s logic before he is arrested or killed -- because not everyone in town wants this mystery solved...

Reviews of BLEEDER:
"Pure enjoyment!"
Seattle Post Intelligencer
"Crisp and original...It keeps the reader trying to guess whodunit, just as a good mystery should; and, as the better representatives of its kind do, it also provides an ending of suspense and real surprise. Any fan of mysteries would enjoy this novel, but for those who also enjoy reading the prose of a master craftsman, I would recommend it even more highly."
St. Austin Review
"Smart, frequently witty, and beautifully researched (the author’s paraphrasing of Aristotle’s logic is an intellectual delight), it is refreshing to read a book where faith is neither demanded, nor held up to ridicule."
Mystery Scene

VIPER summary:
Haunted by the loss of her brother to drugs and a botched raid that ended her career with the DEA, insurance agent Selena De La Cruz hoped to start afresh in rural Illinois. But her gung-ho former boss needs her back to hunt “The Snake,” a dealer she helped arrest who is out of prison and systematically killing anyone who ever crossed him. His ‘hit list’, appended to a Catholic Church’s All Souls Day ‘Book of the Deceased,’ shows Selena’s name last. Working against time, small town prejudice and the suspicions of her own Latino community, Selena races to find The Snake before he reaches her name while a girl visionary claims a “Blue Lady” announces each killing in turn. Is it Our Lady of Guadalupe or, as others believe, the Aztec goddess of Death?
(VIPER was a 2013 Catholic Arts and Letters Award Finalist)

VIPER reviews:
"Compelling characters, an engaging plot and a 'can't put it down' vibe combine to make Viper another literary jewel from one of my favorite novelists, John Desjarlais. Viper picks up where Desjarlais' hit Bleeder left off, and John's writing is better than ever. The cultural underpinnings that color Viper are rich, diverse and well researched, and its action and dialogue will have you instantly connecting with heroine Selena De La Cruz.”
Lisa M. Hendey, Founder of CatholicMom.com


"Entertaining and thrilling...a fascinating mystery and a fun read, with more substance than your average best-seller."
St. Austin Review

Posted by johnny dangerous at 2:05 PM