5 things I wish someone told me about publishing 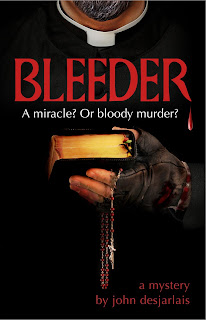 When you're writing, your focus is all about the story and the craft. But there are things about writing and publishing you're never really told along the way. Here are 5 things I wish I'd been told:

1. Just when you think you are done and the manuscript is in its best shape and finally accepted for publication, the agent or editor will ask for lots of re-writing. In my first book, nothing was changed at all. In my second book, the editor requested a few adjustments, nothing big. Those experiences were 15 years ago. Publishing has changed. Today, the competition is so fierce and the output of books so overwhelming (about 20 books PER MINUTE published in the USA) that agents and editors are much more involved in shaping and perfecting the book in order to stand out. My editor for BLEEDER asked the beginning to be shortened a great deal, the ending to be a bit more spectacular, and the motive for the killer to be deepened. There were other things throughout, too many to list - let me just say that at first I was surprised and a little hurt. But - being professional - I agreed that the changes strengthened the work and cranked out the revisions quickly. It is a better book - but I wish I'd known that there was a lot more 'intervention' these days even after acceptance. Well - maybe not. I might have gotten discouraged.

2. You won't believe how many times you'll read your own book in the proofing process. You do want it to be perfect and avoid typos and such. But what tedious work.

3. Promotion and marketing are harder than writing the book, more time-consuming, and potentially a real hindrance to writing. 15 years ago, my publishers invested in my titles with advertising, solicitation of reviews and other things. We've all heard how little publishers are putting into marketing these days, backing only their top-sellers who don't need much publicity anyway. What has made everything harder is the shift culturally from old media to new media, adding loads of work for authors to get noticed in cyberspace as well as public space. Many bookstores are reluctant to host book signings (it's more work for them with little return) and blogs and social spaces can soak up a lot of time with a questionable return. I hope I don't sound like I'm whining - I'm just saying that the business side of writing, the selling side, is a real challenge. There's always something you could be doing, and this can bite into the work you like most - writing.

4. Your book might not get into your local stores or libraries. "But I'm a LOCAL author," you say. That's a plus, but chain store buyers aren't local and don't know you from boo. The smaller, independent stores are better about this, though they check the sales record of your earlier books and if the numbers aren’t great, they won’t carry your new book. Libraries today are strapped for money and many are not purchasing new titles. If you try to set up an event at their place, some want you to donate a copy of your book to the collection (a proposed alternative is to ask if you can sell copies on the premises after your presentation/workshop, and donate 5%-10% of the proceeds to the library book-purchasing fund and then hope they buy a copy of your book with that).

5. If your book DOES get into stores, it won't be there long. The shelf space in a store is valuable real estate, and books are rotated very fast, sometimes every few weeks. That's not much time to create a buzz and build good sales numbers. That's why so much promotion has to be done BEFORE the release date of the book. And if the sales numbers aren’t super – especially if there’s no ‘sellthrough’ (meaning all or most of the copies printed were sold), then your chances of getting published again are smaller, even if you’re a pretty good writer.

All of this is not deterring me from moving ahead with my next book, the sequel to BLEEDER (tentatively titled VIPER). But I know that when I'm done with it - I'm not.
(BLEEDER is due out in August 2009. Look for it at Amazon).
Posted by johnny dangerous at 10:05 AM