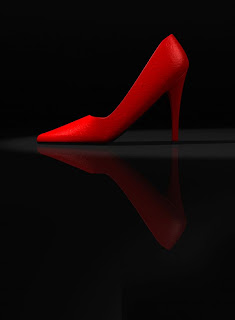 I’m speaking at a writers’ conference in August on character development in fiction, and here’s the tentative outline of my talk. You can imagine how it will fill in, with definitions, quotes and examples from my work and other places. I’ll invite participants to offer examples, too, from their own writing. How’s it look to you? Anything I left out? It looks like ‘dialog’ is left out, but that’s treated in Section IV A.
One way Selena de la Cruz is developed in BLEEDER and VIPER is by her clothing. As with many Latinas, her shoes make an important statement.
Me? Sears Roebucks.
OK, here's the outline:

What a Character!
John Desjarlais
www.johndesjarlais.com


I. qualities of well-dramatized fictional characters
A. motivation
B. consistency
C. plausibility

II. types of characters
A. flat
B. round
C. static
D. dynamic

III. character changes
A. within the possibilities of the character
B. sufficiently motivated by the circumstances
C. allowed sufficient time for a change of its magnitude to take place

That ought to fill an hour, huh?
Hmm - looks like the 'editor' didn't preserve the indenting. That's ok; it's still readable.
Posted by johnny dangerous at 4:50 PM