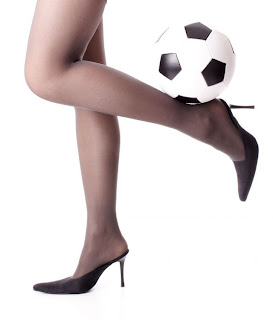 Johnny's been a good sport to let me blog here this month. Since this is the last day of March, I thought I'd depart with one more memory.

I wanted to join the boys' soccer team in Middle School. Not that they had a problema recruiting boys for the team, as happens in some school districts. And it wasn't because there wasn't a girls' team - there was, and they were pretty good. But growing up with three brothers, I needed more competition. A challenge.

So my brother Antonio took me to the boys' field to introduce me to the coach. I politely asked to join the team, bouncing a ball knee to knee to show him what I could do. But the man spat out his whistle and laughed at me. "The cheerleaders are over there," he said, pointing behind me and widening his stance.

So I drop-kicked the ball hard right between his goalposts, so to speak.

I was suspended for three days.

Ay, my Mami had the fire of an amazona in her eyes when I got home.

"Y que te ha entrado a ti? El que diran?" she scolded while stirring habichuelas on the stove. "What has gotten into you? What will they say?"

"They'll say I should have been allowed to try out," I said, displaying the unbecoming gringita
habit of speaking my mind.

So I was sent to bed without supper as well.

This is one of the 'rules' of growing up Latina: do not forget a woman's place. I keep forgetting this rule.

That's it. I'll "see" you again when you read Johnny's book VIPER coming around Christmas. For now, adios.

Posted by johnny dangerous at 3:24 PM