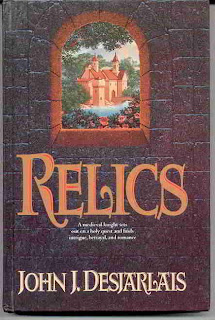 In the writers conference I'm in this week, there is much talk about 'branding' and building a 'platform' for one's work as part of a marketing strategy. My historical novels consider major cultural collisions. The Throne of Tara (discussed yesterday), for example, is about the Dark Age collision of nascent Christianity in Ireland and Scotland with animist Druidism -- and a hero whose poetic and scholarly side is in conflict with his warrior heritage and savage temper.

Relics (Thomas Nelson 1993), set in High Medieval France and Crusader-occupied Palestine around the year 1250, considers the collision of Europe and the Levant and two major world faiths. This is personified in the equally devout passions of the protagonist and antagonist: Jean-Michel d'Anjou, a young, disinherited knight on a quest for a holy relic and -- more impossibly -- a lady's hand, versus Nazim ad-Din, a dedicated and supremely pious member of the hashishiyim, The Assassins, a fearsome sect committed to driving out the defiled oppressors from their lands. In the book I'm planning where St. Patrick is a major character, the collisions are broader, even sweeping: barbarian and Roman, Church and state, Christian and pagan, Orthodoxy and heterodoxies of every sort.
So that's my historical brand, I guess: cultural collisions personified in deeply conflicted characters.
The mysteries - ah, that's another story.
Posted by johnny dangerous at 8:21 AM