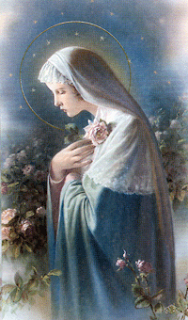 How appropriate that you raise the issue of Marian devotion in the month of May, which Catholics call "Mary's Month." For the benefit of readers new to the blog, I'll repeat your question here and note that I've tried to answer your thoughtful questions about Catholic belief and practice in earlier postings. I invite other readers to submit a sincere question and I'll try to reply as I'm doing today - briefly, Biblically, and honestly.

Here's your question: "I think the biggest setback for me (regarding adopting the Catholic faith) is the apparent idolization of Mary in the church. What can you tell me about this?"

This was a major issue for me, too, and what I once considered 'idolatrous' has now become a central part of my devotional life. There is a great deal of misunderstanding and wrongful practice even among Catholics concerning Mary which doesn't help matters much. Some rather superstitious practices turn people off - including devout Catholics.

The first point to be made is this: All proper Marian devotion is Christocentric. Mary herself is never to be worshipped - for worship belongs to God alone and anything that is like 'worship' would be, as you suggest, idolatrous. Still, she occupies a place of special honor by virtue of her courageous, humble and faith-filled "yes" to God to bear the Christ-child into the world. "Let it be done unto me according to your word" - if only all believers responded to God in this trusting way. So, Christ takes his human nature from her, but without the attending human fallenness or fault. God prepared her as a pure human vessel by which to enter the world as a man (that's what "the immaculate conception" means - it's about Mary's purity, not Jesus' virgin birth). If God Himself honored her so and took her to be "the spouse of the Holy Spirit," should we not also honor her?

So Christ takes his human nature from her, and she is the first person in whom Christ dwelt - literally. She does not appear often in the gospels, but at critical turning-points. Consider the wedding at Cana where she tells the house servants, "Do whatever he tells you to do." These words are spoken to us as well. This is her role, really - to point us to Christ.

And when she suffers as only a mother can beside him at the cross, being one of the very few who stay with him to the end, she is an image of a faithful disciple who shares in Christ's suffering. When Jesus says to John from the cross, "Behold your mother" in John 19, he is saying it to all of us.

That's one reason she is called the Mother of the Church and of all believers in Revelation 12, where she is pictured as "a woman clothed with the sun, and having a crown of 12 stars and the moon under her feet" - hence she is called Queen of Heaven and of the Apostles (the Twelve). I know the language is highly symbolic here and that Protestant commentators prefer to say the woman is "Israel" (the 12 referring to the 12 Tribes). It could be both but the plain reading suggests it is Mary.

The other interesting thing to me in that passage is how, just before the "12 stars" lines, John sees 'the ark of the covenent' in heaven. The ark of Moses has long disappeared. So what ark does he see? It is Mary. In her womb she contains the Living Word, just as the ark contained the written Word on tablets. The words the angel used at 'the annunciation' - "The Holy Spirit will overshadow you" - is an echo of the wording used to describe the glory of God "overshadowing" the ark.

OK, so we can honor Mary's special calling, but why pray to her? Isn't that idolatrous? Not really. Haven't you ever asked a friend or relative to pray for you? That isn't idolatrous. Praying to Mary is like asking that friend to intercede for you. But this is more than a friend. This is Jesus' Mother - in a high place, close to the heart of Christ who loves her. If he loves and honors her so (and he surely obeyed the command to "Honor your father and mother"), shouldn't we also, in order to be genuinely Christ-like?

The clincher for me is this: Take a look at I Kings 2:13-20. Bathsheba, the Queen Mother of King Solomon, Son of David, occupies a royal throne beside her son. She receives requests from subjects and brings them to the king, who welcomes her and cannot refuse her anything. Bathsheba, then, is a 'type' of Mary, the Queen Mother of the Royal Son of David. When our requests are carried by her to the King, they are purified and perfected and presented most lovingly. Do we still pray to Jesus directly? Of course. But there is something tender, non-presumptuous and humble about not blustering into the royal court, but asking our Mother to carry in our poor requests on our behalf.

If Mary occupies such a high place in the Kingdom, why is there little-to-no mention of her in Paul's letters then? Good question. I don't think Paul's silence here means that there wasn't high reverence for the Mother of God in the early days. Quite to the contrary, the letters of other early Christians (the first disciples of the first disciples) speak of Mary often, and by the late 4th Century she was firmly honored as "The God-bearer" (theotokos) as a result of the Church's clearer definition of Christ's comingled human and divine nature. Remember, Paul's audience was primarily Greek, and they would have missed the significance of Mary as the New Eve and The Queen Mother of the Davidic King - very Jewish ideas.

I don't buy this nonsense that the veneration of Mary began in the early Middle Ages as a way to infiltrate pagan cultures that worshipped female deities or "the great goddess" and thus Mary was a convenient substitute. The historical evidence says otherwise.

And I no longer have an issue with the "assumption" whereby Mary was 'taken up' into heaven bodily without corruption, or the "coronation" of Mary as Queen of Heaven and Earth. These ideas are also very Biblical. I've already mentioned the Revelation 12 passage (the woman with the crown of stars) and the typology of Bathsheba, so that's the "Queen Mother" business. And aren't all believers looking forward to receiving "the crown of life" prepared for those who endure, as Paul says? Don't the believers who are already in God's presence glady offer Him their golden crowns, as we see in Revelation? Sure. So in this way, Mary is a 'picture' (or "icon") of the whole church. I hope you're appreciating the sacramental symbolism here.

The same idea applies to the 'assumption.' Don't we read I Thessalonians 4 with great hope about being taken up in a blink to meet the Lord in the air at His glorious Appearing? Again, Mary is the 'icon' of this event that awaits all of her spiritual children. What has happened for her already out of the great love of God for her will also happen to us.

Last point: Mary appears at the earliest part of the Bible, in Genesis 3, where God prophetically announces that a woman will crush the head of the serpent. Sometimes called "the proto-evangelion," or the very first announcement of the Good News, this passage has always been understood as a reference to a woman bearing a savior. Just as humanity fell into ruin via the disobedience of the First Eve (and Adam), so will humanity be renewed via the obedience of the New Eve, Mary. This is why, in many statues of Mary, you'll see a snake under her foot.

And you know what? The Evil One can't stand the thought that he has been defeated by a woman.
Posted by johnny dangerous at 10:44 AM

Thank you for your wonderful post on Our Blessed Mother.

Thank you for your wonderful post on Our Blessed Mother.