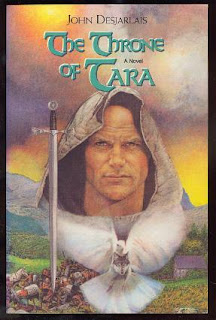 Since I'm participating in an online writers conference this week, I thought it might be helpful to say a word or two about my novels. Welcome to anyone from the conference who may be visiting here!

My first novel, The Throne of Tara (Crossway 1990), was a Christianity Today Readers Choice Award nominee. It retells the thrilling true story of Saint Columba of Iona, the hot-headed Irish monk who was the best man the 6th Century could produce: a poet, scholar and warrior, destined by his bloodline to be High King of Ireland, a man with a prodigious memory, booming voice, and - it is said - the gift of Second Sight. His temper got him into major trouble. In what may be the first copyright dispute case, he went to war over a book and its copy - the Battle of the Book in 560 AD - in which 3,000 men were slain. In remorse over those killed, Columba exiled himself among the savage Picts of Scotland, promising to win as many souls to Christ as were lost on the battlefield. He dueled the Druids - miracles versus magic - proving the power of God (and encountered the Loch Ness monster along the way).

When the book had a decent run and went out-of-print in 1999, I had it re-issued through iUniverse.com, a print-on-demand service that, at the time, had a special deal for out-of-print titles. The book still sells modestly after all these years, and I continue to schedule book signings and such to promote it.

I've gathered quite a bit of research on Saint Patrick and the late Roman Empire, and I expect to produce a 'prequel' at some point (it is tentatively titled The Light of Tara). I'm working on mysteries now, but from time to time I hear the clang of swords, the chuff of horses, the chants of Druids, and I smell the peat smoke and salmon stirabout from the cabinet where my notes are stored and think - Aye, sure and it will be time soon to travel back there, lad.
Posted by johnny dangerous at 3:35 PM